There are times in many indie author’s careers where the author must step back and analyze his or her business.

In that understanding, I’ve been considering not only making Kingdom through the Swamp free, (which I’m already in the process of working out with amazon) but also Nocturna League #2 and #3. The fact of the matter is that the more free reads I have, the more readers I’ll have to provide feedback, hop into some of my other works, and generally have a great time.

I quite much want to charge money for my writing, but from all the books I’ve read on the subject, engaging readers and then charging them is the way to get the dough. It seems I will just have to be patient, and keep writing diligently.

This seems to be the best course of action. I can’t very well make a patreon at this stage; I’m no youtuber, and few know my name. No kickstarter yet; I’d have to express some extreme creativity to wile up a project. And too, I can’t very well charge up front for books before the reader’s gotten to know me, I want trust first and money second. I’m wondering… should I add a “hire me” tab on my website? Perhaps I should put my foot in the door for some editing work.

That said, look forward to the upcoming free works and works being made perma free. I hope you’ll enjoy it!

Next item of thought is the recently completed Nocturna League: The Record of Ambition cover. As this is an episode that looks to the past to understand the Nocturna’s present relationships. It will look back to understand how Colette and Grancis found the crew of the Nocturna and threw in their lot with the mysterious Captain- of course, there will be everyone’s favorite giant lobster/chef, Boris.

Take a peek at the cover and an excerpt below: 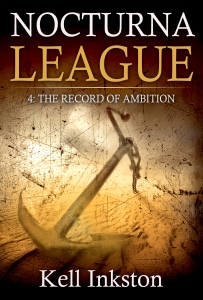 Excerpt from Chapter 5 of The Record of Ambition:

“Colette gets up sheepishly and steps over to the weird round podium the officer points out. The next few minutes are filled with more bright lights, beeping sounds, and the officer taking down information on the two of them. Once it was all over, the man inputs the data into another strange device, which produces little cards with Colette’s and Grancis’ faces, information, and I.D. numbers. “Here you are,” he says. “Always keep these on you. Give them to no one. And some friendly advice? I don’t know what the hell you girls have come here for, but you’re going be dead before you get it. I registered your dimension-pass number as three million two hundred thousand and forty six. I can get you home if you need me to- which is what you should do, like right now.”
Colette grips Grancis’ wrist. “Thanks for the advice, but we’re here to stay.”
No expression can be seen behind the officer’s helmet, but he frowns in pity. “And stay you will. Stick together, alright?”
Colette nods. “You can count on us for that much. We good?”
“Yeah,” the officer nods back at his desk, “go on ahead.” As they turn away, Grancis thinks of her father for some reason.
“Alright,” Colette says, stepping away from the tent with Grancis and up to the bustling crowd around the gate.
The two look over the shifting groups of strange, even otherworldly figures. “So what’s the plan?” Grancis asks, eying an enormous robed skeleton walking around.
“We find a community center, like a tavern, or something, then we ask ‘em who the toughest people around are.”
Grancis takes a deep breath. “Alright… Should we ask for directions?”
Colette nods. “Good thought.” Grancis takes the initiative and steps up to the least-intimidating of the passerbys: a white-haired lady looking about their age, accompanied by a raven-haired, rather handsome lad, a small black cat in his arms.
“Hi ther-” Grancis greets, stepping to just the side of them.
“Sorry, busy,” the lady says, stepping on with the man and the cat to somewhere else in the town.
Grancis sighs, just as Colette ranges up. “Hey, we were talking to you!” Colette stamps her foot, watching the three walk off. “Alright, we’ll just look around- places have signs, after all.” Colette tugs Grancis along into the shifting crowd of Wreckwind.
The officer was wise to advice caution. Port Wreckwind is among the nastiest, deadliest, shadiest, and overall most unpleasant communities in the Omniverse. Of course, there are worse places, there are always worse places, but among places that people actually live in, it’s hard to beat. In Castel Durrimarim’s “Twenty Best and Worst: Towns and Cities” edition, she places Port Wreckwind at number three, a ridiculously lofty achievement when it comes to becoming nasty, considering the billions upon billions of certifiably, objectively nasty places that exist throughout the Omniverse. The vast majority of tourists leave the day they arrive; if it’s not the bleak, fish-scented atmosphere, the mean shopkeepers, or general unease pervading the place, it’d be the muggers, killers, flesh-eaters, or one of the rather unpleasant tentacled beasts that live in the sewers. Certainly, the sewer beasts only want to make friends and give hugs, but their way of showing affection usually ends up with people being divided in half- oops. Overall, it’s filled to the brim with characters that not only would not invite you to their birthday party, they would likely invite all your friends just so they can gossip about you together while they beat a pinata shaped like your face.
It’s fortunate then that Colette and Grancis won’t be getting torn in half, stabbed, eaten, or in one manner or other killed this night. Unfortunately, they will meet a person that is considered to be, out of the fifty-thousand so inhabitants of the port, to be the most dangerous.”

-Walking the Scar: speed seems to be kicking back up with the publisher. He’s looking into ways for story shift authors to manually upload chapters so that we won’t have to rely on him as much.

-Relic: Taking my time with this one. I expect to have some real time to write a good deal more in it soon.

I believe that’s all the news for now. Do take care of yourself, those of you in the Northern Hemisphere- it’s finally getting cold, don’t you think? Give me your thoughts and tell me if you have any advice.

To the world beyond the world,

This site uses Akismet to reduce spam. Learn how your comment data is processed.